Vietnam, over the past three decades, has sought to boost its levels of industrialization by developing an indigenous automotive industry. And VinFast, a member of Vietnam’s leading real estate development Vingroup, seems to be a dream come true.

In 2002, the government targeted to increase the localization ratio – which refers to the proportion of parts used in final assembly that are not imported – for passenger cars to 20%-25% within the next three years and to 40%-45% by 2010. Yet in 2016, the average ratio for all vehicle types was just 10%.

Without localized production, the country’s automotive industry cannot provide the momentum for industrialization that the government wants, according to Le Hong Hiep is a Fellow at the ISEAS – Yusof Ishak Institute, Singapore.

VinFast, set up in 2017, has built a huge manufacturing complex and developed two prototypes that debuted in the 2018 Paris Motor Show.

Can it keep up the pace that the government has expected?

Within a year, VinFast had built a 350-hectare manufacturing complex in the northern coastal city of Haiphong and developed two prototypes namely sedan and SUV. The company now plans to have its first model on the market this year.

By 2017, it became Vietnam’s largest private conglomerate, with US$4 billion in revenue and US$254 million in net profit.

Vingroup entered the automotive industry in 2017 and smartphone industry a year later. It also established a subsidiary to invest in technologies such as Artificial Intelligence and Big Data, with a view to transforming itself into a tech company by 2028.

The group has set an ambitious goal of becoming a leading Southeast Asian carmaker by 2025, with the capacity to produce 500,000 vehicles a year from parts that are at least 60% locally made.

To achieve this, it has worked with international suppliers including Siemenes, ABB, Bosch to set up eight factories producing parts and components in Vietnam. The company also acquired General Motors Vietnam to produce cars under license and started developing electric scooters, which have been on the market since November 2018.

Hiep listed a number of factors that are working to facilitate the company’s business.

First of all, there is great potential for growth in Vietnam’s automotive market. Currently, there are only 16 cars in Vietnam for every 1,000 residents, compared with 341 in Malaysia, 196 in Thailand, and 55 in Indonesia. In addition, as a demographically young country of 95 million people with a rapidly expanding middle class, Vietnam could prove fruitful for VinFast and other carmakers if they can cater to the varied demands of local customers.

Secondly, as a new player, the company can adopt advanced technologies and a forward-looking business strategy without having to deal with legacy issues. Its decisions to develop e-scooters and electric cars are key investment portfolios.

Thirdly, the group’s solid business ecosystem and customer bases of about 5 million bring with them unique advantages in marketing in the domestic market.

Fourthly, Vingroup’s success in the real estate business owes much to its political connections, which will bring its VinFast subsidiary further advantages as the company aligns its commercial goals with the government’s industrial policy objectives.

In the past year, the company’s manufacturing complex has been visited by President Nguyen Phu Trong, Prime Minister Nguyen Xuan Phuc, and Chairwoman of the National Assembly Nguyen Thi Kim Ngan. The government also provided VinFast with various preferential incentives, including a 50% reduction on corporate income tax for its first 15 years of operations. Such incentives are expected to help it navigate any financial difficulties in the first few years.

Finally, nationalist sentiment could also work in VinFast’s favor. Right from the beginning, it has mobilized such sentiments to connect with potential customers and win the government’s support. For example, VinFast deliberately held the groundbreaking ceremony for its new complex on September 2, 2017 – Vietnam’s national day. 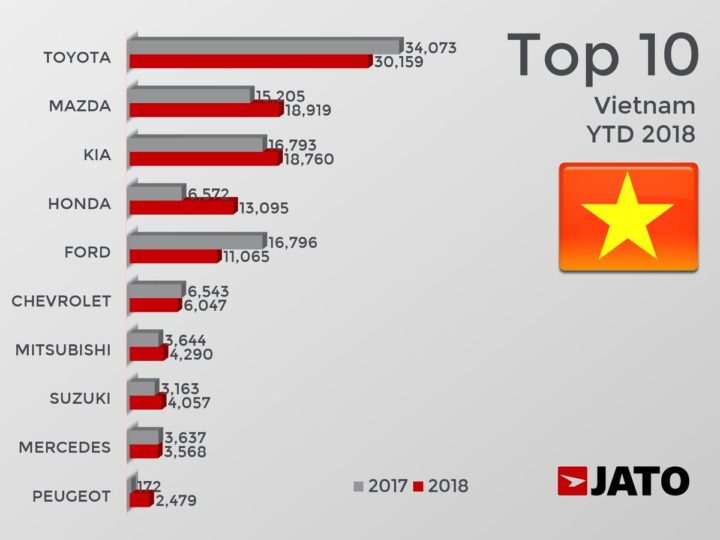 To do so, it needs to take advantage of economic growth, but the small domestic market is a major impediment. In 2017, the combined sales of the Vietnam Automobile Manufacturers’ Association totaled 272,750 units. Expanding this market requires cars that are more affordable to the average Vietnamese consumer.

(iii) Taste: Those who are in the market for a new vehicle are more likely to buy imported models than domestically made ones.

VinFast needs to build brand recognition and invest heavily in its research and development capabilities, but the country’s lack of relevant technological and human resources will make this a challenge.

Taken together, the challenges facing VinFast may seem to outweigh the positives. But it can be argued that the group’s emergence remains a positive development for Vietnam’s automotive industry as a whole.

If VinFast is successful, it will provide a boost to Vietnam’s GDP and reinvent its automotive industry. The group’s transformation from a real estate developer into a hi-tech manufacturer will also symbolize Vietnam’s evolution from a resource- and labor-based economy into an innovation-led, industrialized one.

At the same time, if Vingroup can play a key role in developing the automotive industry, it will reinforce Vietnam’s market-based economic reforms and put private sector at central stage of the economy.