This year’s estimated per capita GDP of $2,540 marks a $440 increase over 2015, PM Nguyen Xuan Phuc informed the National Assembly Monday. 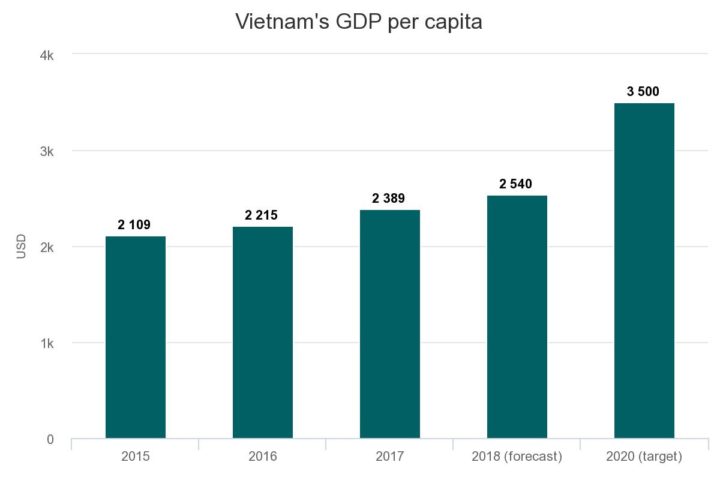 “Many international organizations said that Vietnam has good prospects, and is one of the fastest growing economies in the region and in the world,” Phuc noted.

Vietnam is likely to achieve GDP growth of 6.7 percent in 2018, he said, adding that despite complex fluctuations in the domestic and global economies, caused in particular by the US-China trade war, as well as financial and currency market risks, Vietnam has managed to pull through 2018 with several positive economic signs.

It is expected that inflation will be kept at below 4 percent for the year, the third year in a row that the government has maintained this level, he added.

Vietnam is aiming to post economic growth of between 6.6-6.8 percent in 2019, the PM said, adding that the target of keeping inflation below 4 percent will also be applied.

However, he conceded that there was pressure on Vietnam’s inflation rate due to higher crude and electricity prices as well as costlier education and healthcare services.

To speed up economic development, the Government plans to push ahead with the state-owned enterprise restructuring plan, Phuc said.

“We want to restructure public investment more effectively and improve the efficiency of capital use. Furthermore, the privatization and divestment of state-owned enterprises will ensure publicity, transparency and maximization of the State’s interests,” the PM said.

He emphasized the need for strong development of the private sector and the creation of a favourable and competitive environment that maximizes resources and improves all economic sectors.

The Government will also focus on public investment, speeding up implementation of projects like the North-South expressway and the Long Thanh International Airport in southern Dong Nai Province, the PM said.