Vietnam is now edging even closer to the coveted emerging market status, after FTSE Russell announced that the country is now on the watch list to join its secondary 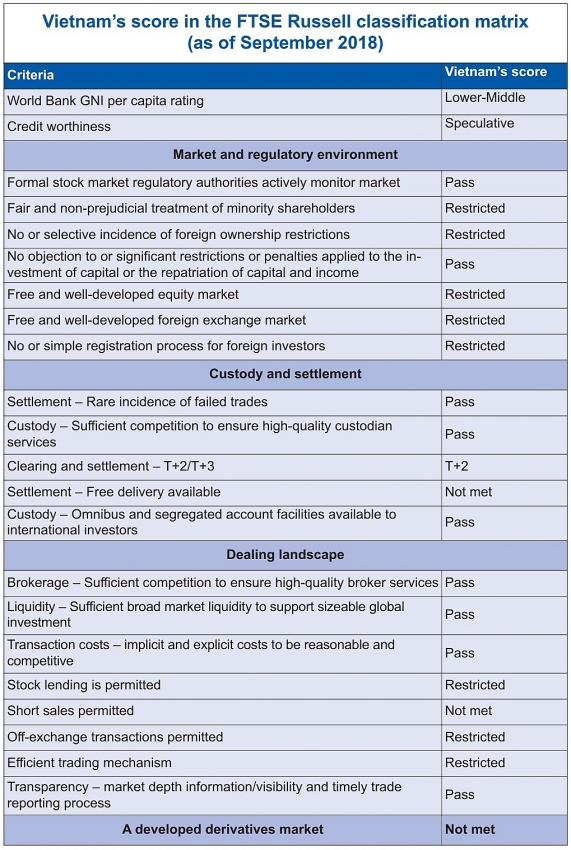 For the past four years, much of the discussion in Vietnam’s frontier stock market has revolved around its possible upgrade to emerging market status, as this is crucial to Vietnam’s attractiveness to major foreign investors. Neighbours such as Indonesia, Thailand, the Philippines, and most recently China have all completed the feat, making market participants in Vietnam even more anxious for news from MSCI and FTSE Russell.

At the end of September, the good news finally emerged, showing that international agencies have taken notice of Vietnam’s ongoing efforts to open up its capital market. In its annual classification review, FTSE Russell named Vietnam as one of the three markets on the watch list, eligible for re-classification as a secondary emerging market. The FTSE secondary emerging market list currently includes China, India, Indonesia, Pakistan, and Russia, among others.

According to FTSE Russell, Vietnam has fulfilled nine out of 21 requirements for a possible upgrade. The four main sections are market and regulatory environments, custody and settlement, dealing landscape and derivatives, together with the national credit worthiness and gross national income rating from the World Bank.

A secondary emerging market by FTSE Russell’s standards should have a formal regulatory body for the stock market, no objection to or significant restrictions applied to the investment of capital or the repatriation of capital and income. Moreover, the market should have sufficient competition to ensure high-quality custodian and brokerage services, and T+2 or T+3 settlement mechanism, which means that a stock transaction should be settled within two or three days. The market must also be liquid and have reasonable trading costs and information transparency.

FTSE Russell’s announcement has been met with a positive reception from Vietnam. Le Hai Tra, acting chairman of the Ho Chi Minh City Stock Exchange, said that Vietnam is committed to achieving the upgrade and is proposing major changes to its Securities Law next year to make this happen. Comments from ratings agencies like FTSE Russell are part of the proposed adjustments.

“We need to maintain what the market has already done well and vastly reduce setbacks. We plan to increase market access for foreign investors by providing details on foreign ownership, introducing intra-day trading and margin lending. We want to regulate risks and protect investors,” said Tra in response to FTSE Russell’s decision.

Analysts believed that an upgrade to FTSE Russell’s secondary emerging market status will help Vietnam attract significant inflows of money from overseas, as fund managers with $1.4 trillion of capital around the world use the FTSE Russell list to make investment decisions.

Fred Burke, managing partner at Baker McKenzie Vietnam, told VIR that investors around the globe pay close attention to these updates, and last week’s announcement will be a bonus point for the already attractive Vietnamese market.

“This watch list announcement is a milestone for Vietnam. Research shows that a market’s possible upgrade means better access to global financial markets and much stronger transparency. Vietnam’s strong market reforms will be noticed by not only FTSE Russell but also MSCI, and these are the two largest ratings agencies in the world,” wrote the analysts at Bao Viet Securities.

Other market observers were also upbeat about the news, but stated that there will be a lot to do and at least one or two years to go before Vietnam can earn its long-awaited upgrade.

According to Le Duc Khanh, deputy head of research at PetroVietnam Securities Incorporation, it took Kuwait nine years and Saudi Arabia three years to make it from watch list status to the official upgrade.

“From now until 2020, foreign capital inflows to Vietnam will continue to increase. However, some qualitative criteria may need several years to improve,” said Khanh.

The analyst also pointed out that the hardest challenge is difficulties in moving foreign exchange notes in and out of the Vietnamese stock market.