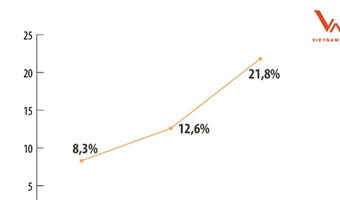 This information was included in the recently released VNR500 Ranking for 2018, which ranked the top 500 largest businesses in the country and is compiled by Việt Nam Report in co-operation with VietNamNet newspaper. This is the 12th consecutive year that the VNR500 has been announced to honour the achievements of Việt Nam’s most successful enterprises. Việt Nam Report also announced the top 500 largest private enterprises.

The five sectors that contributed the most revenue to the 500 largest companies were finance (15.1 per cent); food, beverages and cigarettes (14.3 per cent); construction, building materials and real estate (13.9 per cent); steel (11.7 per cent) and telecommunications and information technology (9.2 per cent). These five sectors accounted for 64.2 per cent of total revenue and 75.5 per cent of the net profit of the 500 enterprises on the list.

The ranking also saw a positive change in the economic structure. Over the past few years, the proportion of revenue from large enterprises in the service and industrial sectors has increased significantly.

A ceremony for the rankings is scheduled for January 16, 2019 at the Rex Hotel in HCM City.

Top 10 largest enterprises in Việt Nam by revenue in 2018:

Top 10 largest private enterprises in Việt Nam by revenue in 2018: