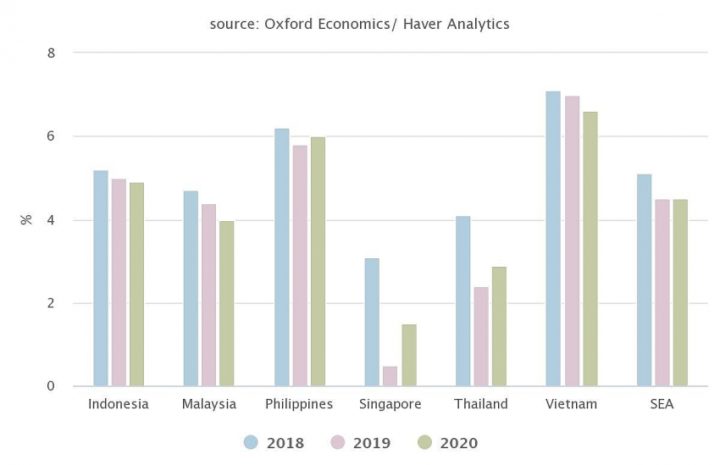 As such,the outlook for exports and private investment will remain challenging and continue to dampen regional GDP growth.

Regional growth has slowed since 2018 and remained sluggish in the third quarter of 2019, with GDP growth across the Southeast Asia (SEA) region rising only 4.5 per cent on-year from 4.4 per cent in the second quarter. The US-China trade conflict has been a key driver for this slowdown in growth, with trade uncertainty remaining a key drag on manufacturing, exports, and investment.

Export-oriented economies have been the most impacted by the ongoing trade tensions, with Singapore only narrowly avoiding a technical recession in this year’s third quarter.

The exception has been Vietnam, which has benefited from some trade diversion effects caused by the trade war. Nonetheless, momentum in Vietnam is expected to ease to 6.6 per cent in 2020, from 7 per cent in 2019, given weaker Chinese import demand and increased trade protectionism.

Sian Fenner, ICAEW Economic Advisor and Oxford Economics Lead Asia Economist, said, “Although there has been some progress in the talks between the US and China, friction between the two countries remains high and the bulk of imposed tariffs are unlikely to be lifted anytime soon.

“Alongside slower Chinese domestic demand, we are cautious that the outlook for regional exports and private investment will remain challenging. As such, we expect Southeast Asia’s GDP growth to moderate to 4.5 per cent in 2020, remaining unchanged from 2019.”

Alongside a more dovish US Federal Reserve, low inflation, and a deteriorating economic outlook, regional central banks have shifted to a more accommodative stance.

The Philippines, Malaysia, and Indonesia are expected to reduce interest rates by a further 25 basis points (bp) over the coming quarters, followed by an extended pause with fiscal stimulus to complement central bank efforts to cushion the economic slowdown.

However, the room for fiscal manoeuvring will differ across the region. Most Southeast Asian economies such as Thailand and the Philippines are expected to roll out stronger fiscal impulses. After running a series of fiscal surpluses, Singapore has the most fiscal room to ease policy. Given the highly uncertain trade environment, Singapore’s government is likely to announce measures such as cash handouts and funding support for small- and medium-sized enterprises (SMEs) in next year’s budget.

In contrast, both Vietnam and Malaysia are constrained, given current levels of public debt. In Malaysia, despite the announcement of a mildly expansionary budget for 2020, the government’s continued emphasis on fiscal consolidation and the risks of fiscal slippage suggest limited room for further support.

“We expect the ongoing trade tensions to continue weighing on the overall growth outlook of Southeast Asian economies. Against a weak global backdrop, supportive fiscal measures are expected to underpin an improvement in GDP growth across certain economies, albeit moderately. Overall, Southeast Asia’s GDP growth in 2019 and 2020 are still set to be below potential at 4.5 per cent,” said Mark Billington, ICAEW regional director, Greater China, and Southeast Asia.