In the first two months of 2019, the prospect of market status upgrading and the strong participation of foreign cash flow via exchange-traded funds (ETFs) has created momentum for large-cap stocks to increase strongly, according to Viet Dragon Securities Company (VDSC). 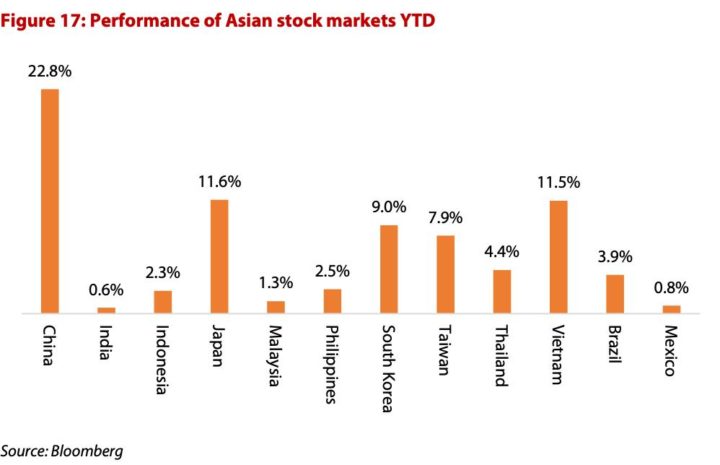 Evidently, the benchmark VN-Index recorded an increase of nearly 9% in the January – February period, accompanied by significant liquidity improvements.

In addition, the government’s determining message on expanding credit and focusing on reducing interest rates for prioritized sectors has contributed to spreading the momentum to mid-cap and low-cap stocks, stated VDSC in its latest report.

Some noticeable events will be happen in March such as two ETFs‘ quarterly review, US Federal Reserve’s Federal Open Market Committee (FOMC) meeting, Brexit, US-China trade negotiations, the equity market might fluctuate in a narrow band instead of increasing rapidly and strongly.

VDSC expected that this situation is necessary to help the market rebalance, especially as the VN-Index is facing the resistance level of 1,000-1,025 points.

It is important to note that the active participation of „hot“ cash inflow from outside, along with the repeating sentiment of possible market upgrade contributed to the strong rise of the index in the first two months of the year.

As long as the foreign cash flow remains in the market, it is expected that short-term investment opportunities are sizeable but would not be equally divided for all. Opening a new buying positions on large-cap or high-beta stocks might not guarantee a satisfactory profit margin, the brokerage said.

For investors seeking opportunities on the market upgrade story, it is necessary to closely monitor the cash flow in and out of domestic and foreign ETFs, according to VDSC. Furthermore, investors should gradually reduce leverage and realize profit in time when there are signs of ETF withdrawal to preserve their earnings.

Besides, those who seek long-term investment should be patient for a better chance, instead of disbursing in this period, it suggested.

Although mid-cap stocks rose nearly 13% year-to-date, higher than the current 8.5% increase of large-cap stocks, it was found that price-earnings ratio (PER) and price-to-book ratio (PBR) of the mid-caps remain attractive, including textile stocks.

Given the rising trade protectionism and trade war, it is expected the trend of shifting orders from Chinese companies to neighboring markets will continue to increase in 2019. As a result, this should have a positive impact on the volume of Vietnam’s textile & garment orders.

In fact, Vietnam recorded a trade surplus of US$860 million in January, with some meaningful insights, including strong drop in export revenue from Chinese market, increasing export revenue from North America markets and the rise of Hai Phong and Hai Duong cities on Vietnam’s trade map.

Soaring exports to the US are strengthening the assumption that Vietnam is benefiting from the trade tension and Vietnamese corporations are winning more overseas orders, the brokerage added.