HCM CITY – The Việt Nam Manufacturing Purchasing Managers’ Index rose by 1.2 points to 53.9 in May, signalling continued improvement in the country’s business conditions. 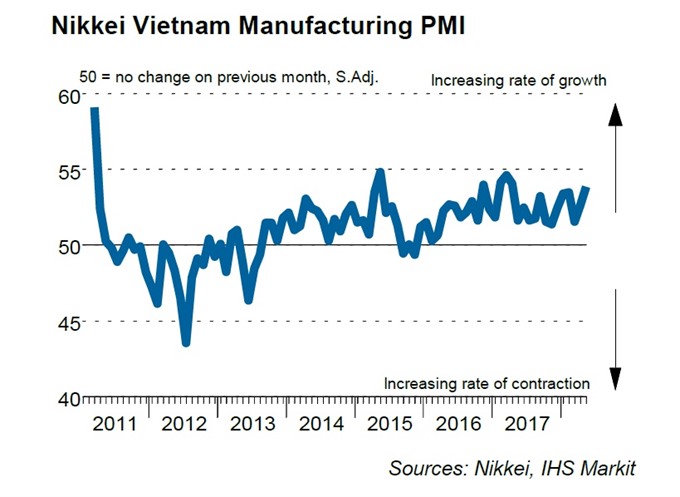 Nikkei’s IHS Markit reported on June 1 that new orders rose at a faster pace than in April and the fastest pace in 14 months, mainly boosted by strong exports.

Manufacturers raised their output prices only slightly despite a steep increase in input costs, which helped secure sales.

The rate of job creation was the sharpest since January.

Suppliers’ delivery times continued to lengthen marginally and purchasing managers in the survey blamed it on raw material shortages.

Business confidence picked up with 52 per cent of respondents expecting a rise in production next year. The confidence is linked to expectations of further new growth in orders.

“A record rise in new export orders is the key highlight in the latest Nikkei Việt Nam Manufacturing PMI, and is helping drive growth across the sector. Output price inflation continued to ease as companies often favoured holding down prices to help secure sales rather than passing on sharp rises in input costs,” Andrew Harker, associate director at IHS Markit, was quoted as saying in the report.

Dr Bùi Quang Tín from the HCM City University of Banking told Thanh Niên (Young people) newspaper that Việt Nam’s PMI index has shown a clear uptrend since the beginning of the year, and he expected it to continue rising strongly.

He said this is due to many factors such as increasing new orders, especially from businesses abroad, and the competitiveness of products.

Manufacturers are more willing to accept a lower profit margin to stimulate demand for goods and services, he added.