Hanoi topped global cities in terms of office yield with the rate of 8.57%, according to Savills World Office Yield Spectrum for the second half of 2018. 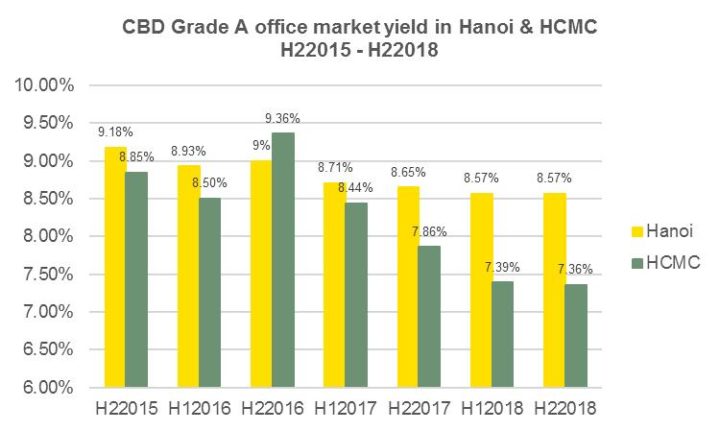 Vietnam’s capital city was crowned for its CBD grade A office yield for the third time since January 2017, followed by Manila, Adelaide, Ho Chi Minh City, and Perth in the top five.

Ho Chi Minh City, which was a runner-up previously, dropped to number 4 with market yield at 7.36%.

Pointing out investment prospect of Vietnam’s cities, Minh said that these markets have been drawing significant interest from international investors, Singapore, Japanese, and Korean in particular.

According to Savills Research in previous office yield spectrum publications, Hanoi and HCM City witnessed a downward trend of yields from second half of 2015 to second half 2018. This was caused by the limited supply of available office development for sale, which has resulted in more aggressive bidding prices from buyers, driving yields further downward.

Office sector is currently a seller’s market in Vietnam; in other words, if you are an office development owner, now is a good time to sell, Minh said.

Over the last five years, real estate remained a popular asset class with investment volume increasing in many segments, according to Savills Vietnam.