Hanoi’s first metro service failed to roll at the end of April as planned since construction is still not complete.

A representative of the Railway Project Management Board said around 1 percent of the construction remains to be completed on the Cat Linh – Ha Dong metro route.

While the stations are more or less complete and tested, some elements like the construction of their outdoor escalator roof and staff’s training remain to be completed.

The source said the delay is because the Chinese contractor, China Railway Sixth Group Co., Ltd, has not submitted necessary documents to authorities for a final inspection.

The EPC contractor, China Railway Sixth Group Co., claimed differences in regulations between China and Vietnam makes it is harder for completing necessary documents, including records on equipment.

„The contractor and the Railway Project Management Board have not completed the necessary procedures for inspection, and the ministry has instructed the board to report on the progress,“ Deputy Minister of Transport Nguyen Ngoc Dong said.

Before it begins operation, the elevated railway must have a system safety assessment by an independent entity, international contractor Apave-Certifier-Tricc.

It also needs to obtain a certificate of quality and technical safety from the Vietnam Register before the State Authority for Construction Quality Inspection runs the final evaluation.

The board said the contractor should focus on completing the construction and installation of remaining equipment, including for fire safety and issuing tickets, and completion of necessary procedures for the final evaluation.

The Hanoi People’s Council has proposed 15 days of free travel in the beginning.

Work on the metro started in October 2011 and was originally scheduled for completion in 2013. But several hurdles, including loan disbursement issues with China that were only resolved in December 2017, stalled it for years. 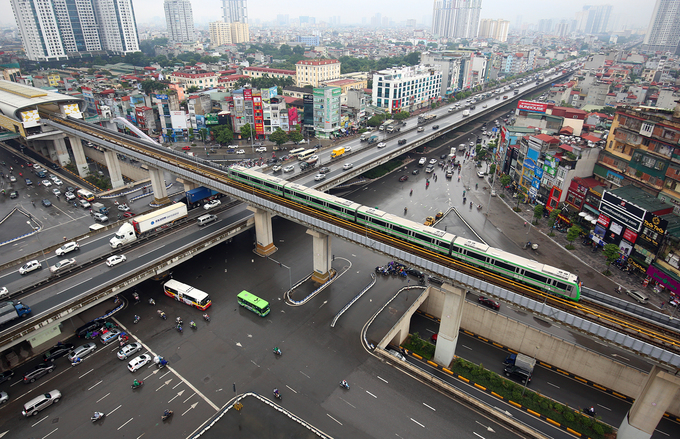 The original estimated cost of $552.86 million ballooned to more than $868 million, including $670 million in loans from China.

The Ministry of Transport had previously wanted commercial operations to begin before the Lunar New Year in early February, but this deadline too was missed.

Meanwhile, about half of Hanoi’s second metro line project has been completed. The Railway Project Management Board plans to commercially operate the elevated section next year and the underground section in 2022.

Work on the line first began in 2010, with the cost estimated at $1.2 billion and operations scheduled to start in 2017, but delays have pushed the cost up to $1.55 billion.

Hanoi, a city of more than 7.5 million people, has 5.2 million motorbikes and around 550,000 cars, besides some 1.2 million brought by immigrants, according to police figures.