FDI disbursement up despite a decrease in registered inflow

The disbursement of foreign direct investment (FDI) posted an increase of 3.1 per cent in January – November over the same period last year to total US$16.5 billion, despite a fall in the registered FDI inflow. 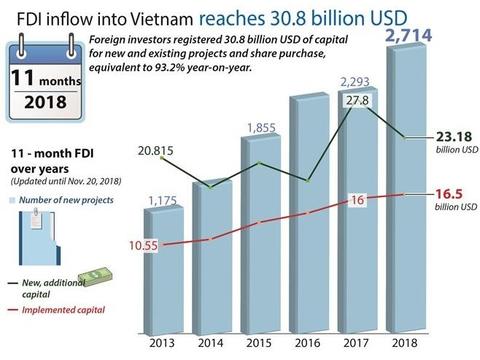 Updates from the Viet Nam Foreign Investment Agency under the Ministry of Planning and Investment revealed that Viet Nam attracted a total of US$30.8 billion worth of registered FDI from the beginning of this year to November 20. The FDI inflow saw a slight decree of 6.8 per cent over last year.

Some 2,714 new FDI projects were granted investment licenses with total registered capital of $15.78 billion in the period, while more than 1,050 existing projects adjusted their investment capital with a total additional sum of $7.4 billion, equivalent to 79.7 per cent and 92.6 per cent of the total in same period last year, respectively.

According to the National Financial Supervisory Committee, the foreign capital inflow through mergers and acquisitions (M&A) was becoming more common in Viet Nam because the time taken to complete investment procedures is being cut.

Oliver Massmann, general director of Duane Morris Vietnam LLC, was quoted by enternews.vn as saying that many foreign investors were showing increasing interest in Viet Nam, driven by the country’s rapid integration, stable macro-economy, hastened administrative reforms as well as improved investment climate, and wanted to enter the market through M&A.

“The trend will continue next year,” he said.

Foreign investors poured most into the manufacturing and processing sector out of 18 industries which saw foreign investment in the period, with a total sum of $14.2 billion, or 46.2 per cent of the registered capital, followed by real estate with $6.5 billion then the wholesale and retail industry with $3.1 billion.

Among 108 countries and territories investing in Viet Nam, statistics showed that Japan was the largest foreign investor in the 11-month period, pouring in nearly $8 billion, followed by Korea with $6.8 billion and Singapore with $4.1 billion.

So far, there were more than 27,000 existing FDI projects in Viet Nam with a total registered capital of $337.8 billion, more than $188 billion of which was disbursed.

After about three decades of attracting FDI, Viet Nam was now more selective, targeting to attract quality capital flow into technology-rich and environmentally-friendly industries and boost the development of local companies through setting up value chains.

Statistics from the Viet Nam Foreign Investment Agency also showed that Viet Nam registered to invest $303.5 million abroad in the first 11 months of this year, plus $55 million worth of additional capital for existing overseas projects.

Viet Nam’s overseas investments were mainly in the financial and banking sector, which made up 29.5 per cent of total registered capital, followed by agro-forestry-fishery sector (19.1 per cent) and manufacturing and processing industry (14.2 per cent).

In January – November, Viet Nam invested in 35 countries and territories, with Laos being the top destination with $97.6 million registered capital, followed by Australia with $52.7 million and Slovakia with $35.9 million.