Vietnam is making moves to fast-track the appraisal of sub-projects of the eastern spur of the North-South Expressway project to facilitate the shortlisting of potential investors, scheduled to start next month. 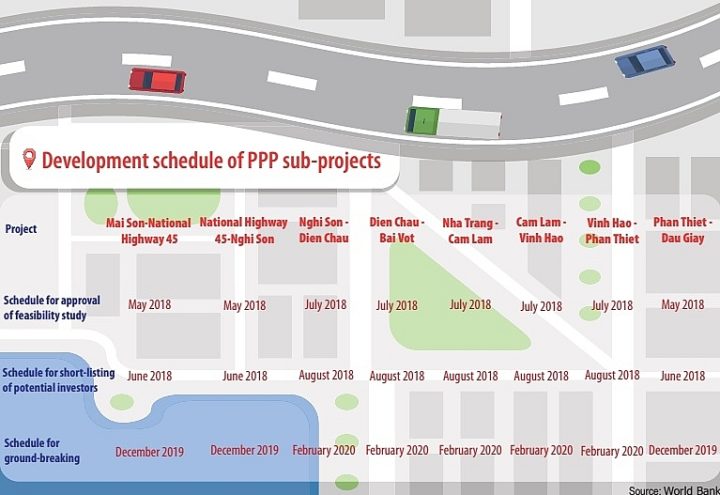 Last week, the members of the State Appraisal Council for the eastern spur of the North-South Expressway project, including representatives of the Ministry of Transport (MoT), the Ministry of Planning and Investment, and others, appraised the feasibility study of the Nha Trang-Cam Lam section of the North-South Expressway project.

The 29-kilometre Nha Trang-Cam Lam section is one of the eight sections of the project to be developed under the public-private partnership (PPP) format. It has a total investment capital of VND5.13 trillion ($228 million), with VND2.53 trillion ($112.44 million) to be sourced from the state budget and VND2.6 trillion ($115.55 million) to be contributed by investors.

As planned, the feasibility study of this section will be adopted in July, thus enabling the country to shortlist potential investors one month later, ultimately kicking off construction in early 2020.

Also last week, the process of three state-funded sections of the project was fast-tracked as well. In addition, the council appraised the 15km Cao Bo-Mai Son section, which has a total investment capital of over VND1.6 trillion ($71 million), with VND360 billion ($16 million) to be used for site clearance.

“The consultant had to adjust the draft feasibility study after getting comments from council members. The feasibility study of this section was scheduled to be approved in May,” a senior MoT official told VIR.

On May 28, the government issued Document No.675/TTg-CN, approving the legal framework on site compensation, support, and resettlement for the Cam Lo-La Son section. The move will facilitate the drafting of the feasibility study.

The 102km section will have a total investment capital of VND7.9 trillion ($351 million), of which VND843 billion ($37.46 million) will be sourced from the state budget for site clearance.

The Cao Bo-Mai Son and Cam Lo-La Son sections are two of the three sections to be funded by the state. The other is the My Thuan Bridge 2 section.

These recent steps are expected to help the project move forward on schedule and enable interested investors to prepare for the bidding, scheduled for 2019.

Many foreign investors have already shown interest in the project, which is estimated to cost over VND118.7 trillion ($5.27 billion), with a total of over VND63 trillion ($2.86 billion) to be mobilised by investors – with 654km to be built. It is considered an economically and politically important project.

“The list of sub-projects is very attractive for foreign investors, in particular European investors. EU firms have a good record of PPP projects in highways and airports, including projects implemented in developing countries looking to improve their transport infrastructure. The airport of Santiago and other projects in South America may be quoted as good examples,” Antoine Logeay, chairman of the European Chamber of Commerce’s legal sector committee, told VIR.

However, EU investors and others are concerned about the drafting of new regulations for PPP projects, particularly the Law on PPP Investment, although the country issued Decree No.63/2018/ND-CP in early May, with some never-before-seen changes to support PPP investors.

“Engineering and construction companies need the support of banks and other financial investors. This support is conditional upon a clear and efficient legal framework for PPP in Vietnam,” said Antoine Logeay.