The booming ecommerce market in Vietnam is expected to beat the previous revenue forecast of US$10 billion and reach US$15 billion by 2020, a trade official has said

Addressing a recent workshop, Dang Hoang Hai, head of the Vietnam eCommerce and Digital Economy Agency under the Ministry of Industry and Trade, revealed the domestic e-commerce sector obtained a growth rate of 30 per cent last year as its total revenue sales amounted to some US$8 billion. This far outstrips the figures of US$5 billion in 2016 and US$6.2 billion in 2017.

Thanh Nien (Youth) newspaper cited preliminary statistics that as many as 67 per cent of local internet users have made an online purchase at least once. Further figures show that up to 82 per cent of online buyers made cashless payments after delivery.

The report notes that Indonesia was leading the way in the region, reaching US$12 billion in 2018 and accounting for more than US$1 in every US$2 spent in the region.

Moreover, ecommerce adoption has also accelerated in Thailand and Vietnam, reaching nearly US$3 billion during 2018. 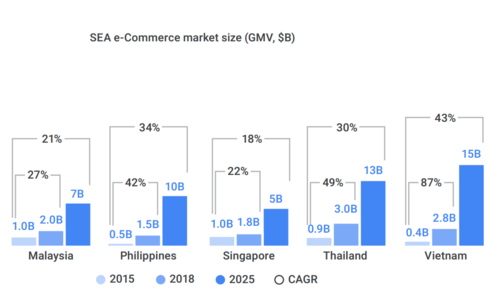 In a trend seen across all markets in the region, Southeast Asian consumers increasingly rely on ecommerce to buy a wide range of products that are unavailable in stores.

This largely stems from a relative lack of development of modern retail channels outside of major urban areas.

According to online shopping aggregator iPrice Group, of the 10 most successful ecommerce platforms in 2018, five of them are currently conducting business in Vietnam, including Lazada, Shopee, Tiki, Thegioididong, and Sendo.