Credit expansion of state-owned banks was lower than commercial banks’, in which the current lack of capital of the former was a key factor in limiting the credit growth potential of those banks. 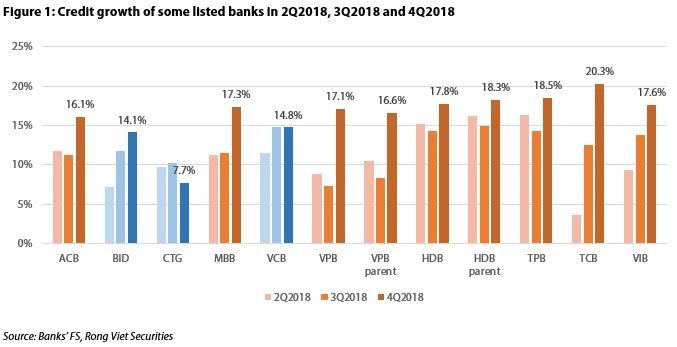 As the government has set the target for the entire banking sector’s credit growth at 14% in 2019, outstanding loans of Vietnam’s listed banks are likely to slow down compared to the levels in 2018 and 2017, though still at a decent level, according to Viet Dragon Securities Company (VDSC).

After a temporary stagnation in the third quarter of 2018, outstanding loans bounced back in the fourth quarter due to additional quota given by the State Bank of Vietnam (SBV), the country’s central bank.

Techcombank’s customer lending even decreased by 0.6% year-on-year, but the growth is compensated by a large amount of corporate bonds portfolio worth nearly VND60 trillion (US$2.59 billion).

Meanwhile, the credit expansion of state-owned banks was lower than commercial banks’ with Bank for Investment and Development of Vietnam (BIDV) and Joint Stock Commercial Bank for Foreign Trade of Vietnam (Vietcombank) keeping their credit growth at less than 15%, in line with the quota given by SBV at the beginning of the year.

Additionally, Commercial Bank for Foreign Trade of Vietnam (Vietcombank) maintained credit growth of as low as 7.7% year-on-year, following the plan to handle impaired loans as per approved by the SBV. However, it should be noted that the current lack of capital of state-owned banks was a key factor in limiting the credit growth potential of these banks.

Since 2019, with a much lower proportion of discount loans, it is expected that the positive impacts on TPBank’s NIM will become less significant. For the cases of Military Bank, Vietcombank and ACB, these banks have successfully expanded NIM via the structuring of asset portfolio towards retail lending, small and medium enterprise (SME) lending and consumer finance.

However, it should be noted that the competition in these segments has become increasingly intensive, stated VDSC.

Regarding Ho Chi Minh Development Bank (HDBank) and Vietnam Prosperity Bank (VPBank), their NIM only increased marginally due to the slowdown of consumer finance business after the booming period in 2017.

Two banks that saw a reduction in NIM were BIDV and VietinBank. In an urgent need to raise capital, BIDV is setting higher target for deposit growth than credit growth during 2019-2020. For the case of VietinBank, to handle impaired loans, the bank booked high other credit costs instead of accelerating provision expenses, thereby 2018 net interest income and NIM reduced by 16.8% year-on-year and 70bps and respectively.

For ten banks above, in 2018, customer loans growth and credit growth maintained at a higher rate than those of customer deposits and mobilization (13.7% vs 13.2%, and 12.7% vs 10.6% respectively). As such, the loan-to-deposit ratio (LDR) has been pushed further in eight out of 10 banks.

Considering the current high level of adjusted LDR in most of the banks, except for Vietcombank, it is expected that the room for NIM expansion by pushing LDR will become more limited. Overall, the growth of NIM and net interest income will be more likely to slow down further in 2019.

For 2019, VDSC forecast the growth of service income in these banks will continue to lead in the sector, though at a lower rate than in 2018. BIDV and Vietcombank are planning to divest from their current life insurance joint ventures to seek for an exclusive insurance distribution partnership. If the banks are successful, they will have potential to earn high one-off income from divestment and up-front fee, as well as higher growth of annual bancassurance fee.

​Other income from the recoveries of previously provisioned bad debts, foreign exchange activities and trading securities also gained strong growth and contributed to the expansion of non-interest income amongst total operating income (TOI).