FDI commitments in the January – November period totaled US$31.8 billion, up 3.1% year-on-year.

Direct investment flows from Hong Kong and mainland China to Vietnam increased by 3.9-fold and 2-fold year-on-year in the January – November period, respectively, amid escalation of the ongoing US – China trade tensions , a report of the Foreign Investment Agency (FIA) under the Ministry of Planning and Investment has shown. 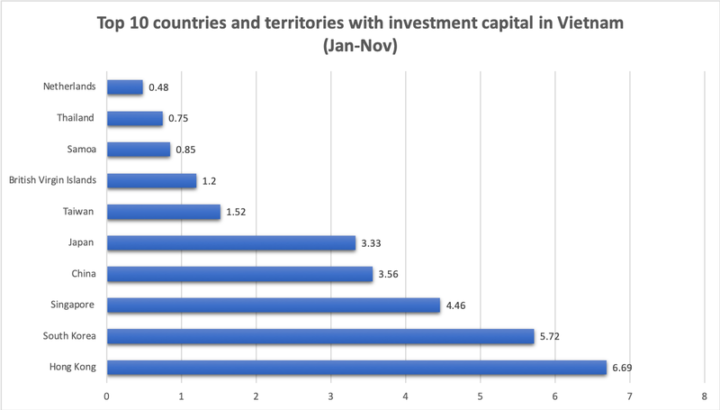 The data shows that out of 117 countries and territories investing in Vietnam in the eleven-month period, Hong Kong (China) took the lead with US$6.69 billion. South Korea came second with US$5.73 billion, while the third place belonged to Singapore with US$4.47 billion.

Among 60 cities and provinces having received FDI between January and November, Hanoi has attracted the largest portion of capital commitments with over US$6.82 billion, accounting for 21.5% of total commitments in the period.

FDI commitments in the January – November period totaled US$31.8 billion, up 3.1% year-on-year, according to the agency.

Disbursement of foreign direct investment (FDI) projects in Vietnam totaled US$17.69 billion between January and November, representing an increase of 7.2% year-on-year,

During this period, 8,561 projects have had US$11.24 billion in capital contributed by foreign investors, up 47.1% year-on-year and accounting for 35.4% of total registered capital.

Investors have poured money into 19 fields and sectors, in which manufacturing and processing continued to attract substantial attention with investment of US$21.56 billion, or 67.8% of the total registered capital, followed by real estate with US$3.31 billion or 10.4% of the total, and retail and wholesale, science and technologies.

Some of the big-ticket projects in the January – November period include a smart city project in Hanoi with registered capital of US$4.14 billion; US$1.2 billion polypropylene (PP) manufacturing plant in Ba Ria – Vung Tau; US$3.85 billion in capital contribution from Hong Kong-based Beerco Limited to Vietnam Beverage for a beer project in Hanoi.

In addition, on the list were an injection of an additional US$410 million to LG Display Hai Phong; the US$260-million electronic manufacturing plant by Goertek (Hong Kong) located in Bac Ninh province; tire manufacturing plant worth US$280 million from a Chinese investor in Tay Ninh province and a similar project worth US$214.4 million financed by Guizhou Advance Type Investment (China) in Tien Giang province; and a solar power project worth US$216.7 million from Thailand’s investors in Phu Yen province.