Actual FDI in Vietnam falls 5% to US$2.45 billion in Jan-Feb

FDI commitments in the January – February period totaled US$6.47 billion, down 23.6% year-on-year.
Disbursements of foreign direct investment (FDI) projects in Vietnam totaled US$2.45 billion in the first two months of 2020, representing a decline of 5% year-on-year, a report of the Foreign Investment Agency (FIA) under the Ministry of Planning and Investment has shown. 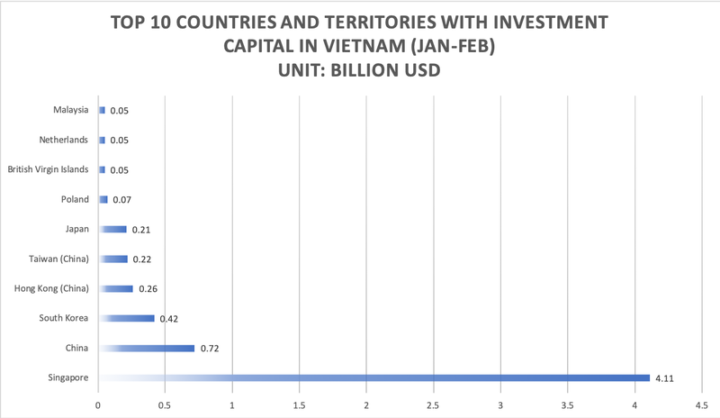 Meanwhile, FDI commitments in the January – February period totaled US$6.47 billion, down 23.6% year-on-year.

A surge in newly registered FDI in the two-month period was thanks to the liquefied natural gas (LNG) plant project worth US$4 billion in the southern province of Bac Lieu.

During this period, 1,583 projects have had US$827.3 million in capital contributed by foreign investors, up 52.4% in the number of projects and down 84% in value year-on-year.

Investors have poured money into 18 fields and sectors, in which electricity production and supply led the pack with investment capital of US$3.89 billion, accounting for 60.2% of total registered capital. Manufacturing and processing came second with US$1.76 billion, or 27.3% of the total, followed by wholesale and retail with US$195 million, science and technologies with US$180 million.

The data shows that out of 73 countries and territories investing in Vietnam in the January – February period, Singapore took the lead with US$4.12 billion, China came second with US$720.4 million, while the third place belonged to South Korea with US$425.4 million.

Among 48 cities and provinces having received FDI in the two-month period, Bac Lieu has attracted the largest portion of capital commitments with US$4 billion. Tay Ninh came second with US$488.3 million, followed by Ho Chi Minh City, Hanoi, Dong Nai and Binh Duong.

Besides the US$4-billion LNG plant project financed by a Singaporean investor, some of the big-ticket projects in January – February include a tire manufacturing plant worth US$300 million from a Chinese investor in Tay Ninh province; an injection of an addition of US$138 million for a Chinese-invested radian tire production facility; an increase of US$75.2 million to Japan’s Sews-components Vietnam manufacturing plant for electronic and auto parts; Hong Kong’s Ce Link Vietnam 2 plant worth US$49.8 million in Bac Giang for electronic parts and products.